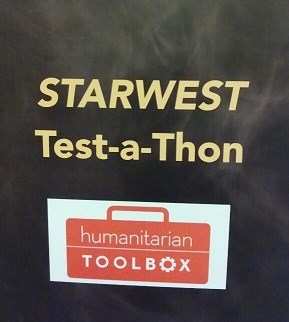 Two weeks ago we had the opportunity to work with the dedicated Testing professionals at StarWest. The organizers invited us to bring some of our in-progress apps to a test-a-thon. Conference attendees gave their time to work through the scenarios we've completed and give us feedback.

This was our first chance to have a set of testing professionals do a thorough round of exploratory testing. Unlike all our testing to date that has been developer-authored unit tests and integration tests, the StarWest volunteers brought a different perspective, that of a testing professional.

They found many issues, they gave us several enhancement requests by approaching the app from a different perspective and suggested some new workflows. We'll take those new suggestions to our subject matter experts and see what they think. They also spent quite a bit of time doing negative testing, trying to exploit areas of the app to do things that shouldn't be allowed. Sometimes they were probing for authorization errors, sometimes probing for data exploits.

We feel good about where we are because the list is manageable given that this was the first time anyone had probed the app. Most of the items represent new features, not broken features, and there are only a small set of security issues. Overall, the test professionals made a great contribution to the application. They have given us a set of issues and a set of enhancement ideas that will make the final application much better. It's a strong and important contribution.

Many thanks to StarWest attendees, to the TechWell team for all of their support and to Microsoft for sponsoring the Humanitarian Toolbox at Star West. We should also mention the efforts by volunteers from Neusdesic who participted in the testathon for the duration. It was a worthwhile and valuable experience; we will definitely do this again.